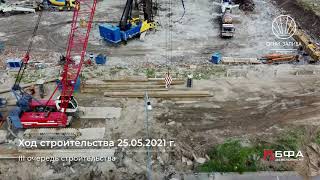 The company was founded in 1991 under the name «Petrovsky Trade House». Prior to 2005, the largest shareholder of the Industrial and Construction Bank (PSB). After the sale of the shares of the PSB the development became the main type of activity. In 2007, the company received its present name — «BFA-Development».

Now the company has projects in the sphere of commercial and residential real estate with a total area of 1.5 million square meters, the cost is more than half a billion dollars. Among the completed projects are the business centers of A class «Nevsky, 38» and «Linkorn» on 36 Petrogradskaya Embankment, multifunctional center of A class in the Nekrasov Street, Residence Hotel&SPA in Repino, as well as a number of other objects.

The portfolio of «BFA-Development» also has several promising new projects.